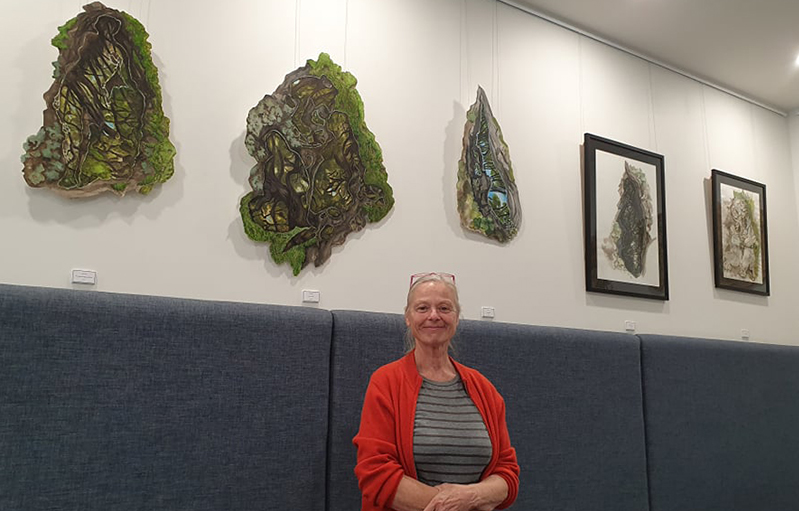 We'd like to welcome Julie Shea to our Art Hub. This new initiative is 100% free of charge, with all proceeds returned directly to the artist. Find out more here: https://www.coastline.com.au/community/art-hub/

Julie Shea (b. Scone, NSW 1957) is an artist living and working in Dondingalong, near Kempsey, NSW, Australia. Her interest in art was initiated by her maternal grandmother, Edith Smith, a rural painter from Stanthorpe, Queensland. Julie attended schools in Scone and Sydney. Julie’s works on paper are centred around the psychology of visual perception.
After several years as a secretary and travelling through Europe, Julie was able to pursue her art career. From 1981-1983 she studied at Alexander Mackie/City Art Institute achieving a Bachelor of Visual Arts. In 1988 she carved marble in Studio Carlo Nicoli, Carrara, Italy, then in 1989 moved to the Mid North Coast and involved herself with the local art community while working on farms, doing portrait commissions, private teaching and exhibiting locally and in Sydney and Molong.
She moved to Dondingalong in 1994 to start a family then recommenced art making, entering local and interstate art prizes. From 2004–2005 she co-ordinated the Macleay Valley Life Drawing Group.
In 2006 Julie bought Wonderland Framing & Art with her husband which they ran as an arts hub until the beginning of 2018. There, Julie managed the Gallery, art supplies, teaching and art courses inviting local artists to teach, and participated in community services such as art competition judging. From 2006 - 2008 she entered competitions with frequent success, and exhibited at the Macleay Valley Community Art Gallery.
In 2008 Julie commenced her Master of Cross Disciplinary Art & Design online from UNSW which she completed in 2013. She received a Merit award in FilmOneFest, USA in 2009 and was a finalist in WOW Film Festival, digi-media. Inclusion in group regional exhibitions at Port-Glasshouse Regional Gallery in 2009 and 2011 resulted in invitations to give artists talks there.
Julie’s solo exhibition of drawing animation in 2010, “Post Real”, at MVCAG and online, resulted in talks at Kempsey TAFE. 2011 and 2012 saw her exhibiting at the MVCAG with the drawing group and in Sydney with a pop-up opportunity offered by National Institute of Experimental Arts. After completion of her Master’s in 2013 she exhibited at the COFA annual, then in 2014 in (Un)seen Sculpture – Mobile 3-D AR at the Port Macquarie Glasshouse. She curated Tipi Responses locally in the same year contributing performance, sculpture, 2D works, QR, and video.
From 2015 she began independent supervised research in Art + Animism until 2017, then short online courses including Writing, Robotics, Museums, Mobile Content Creation and Leadership.
2019 included Japanizi, a local two person exhibition, and group exhibitions in Sydney and Wollongong. Her exhibition Retreat: Becoming the Forest was held locally in 2020.
Julie is currently preparing for a solo exhibition for January 2023 and is teaching an art therapy course at Macleay Options in Kempsey.